DORSET ECHO
"The London Repertory Players are dishing up this classic...thriller"
23 Aout 2019 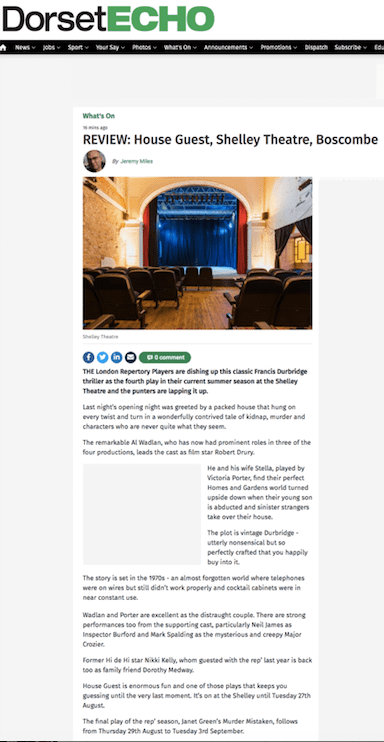 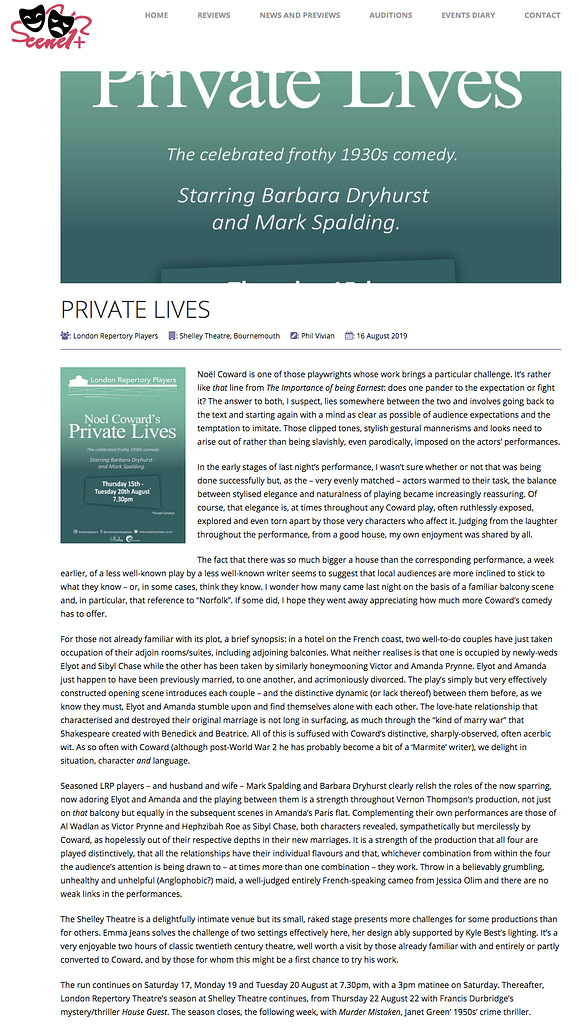 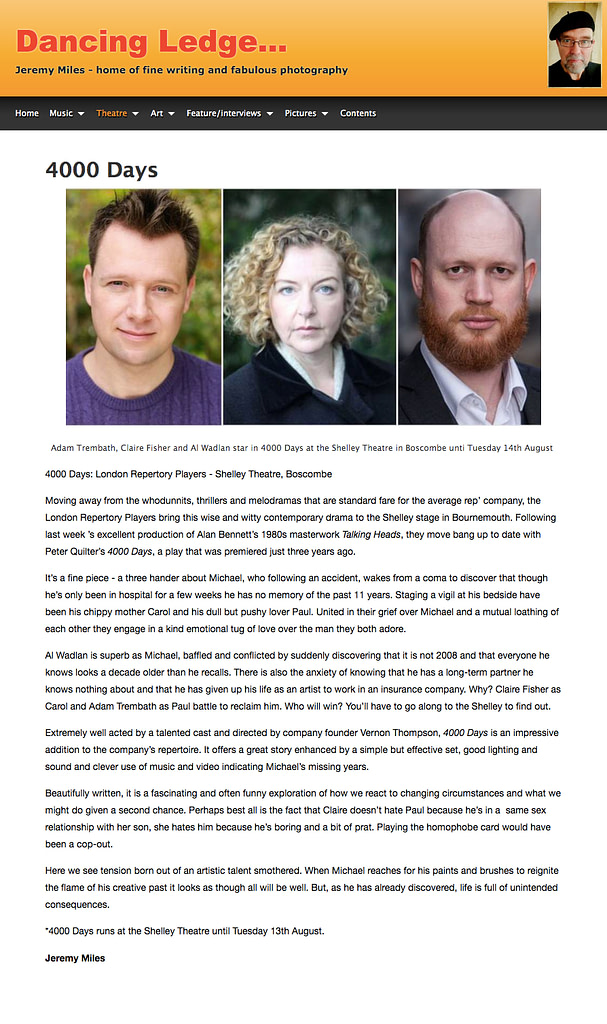 DAILY ECHO
"This is a quintessential Coward"
16th August 2019 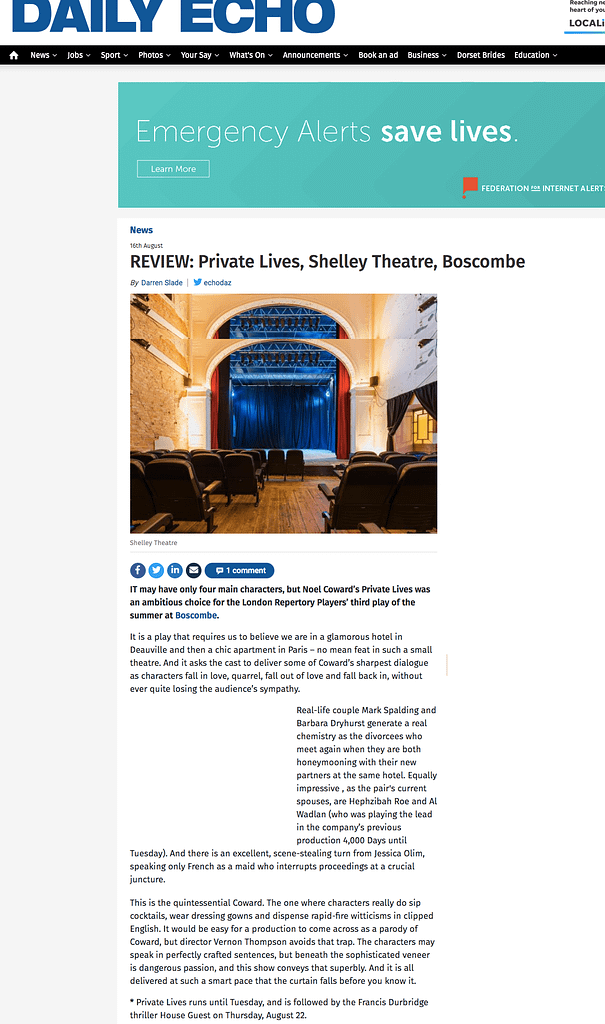 SCENE ONE PLUS
"A thoughtful, often wittily amusing and at times poignant piece of theatre"
9th august 2019 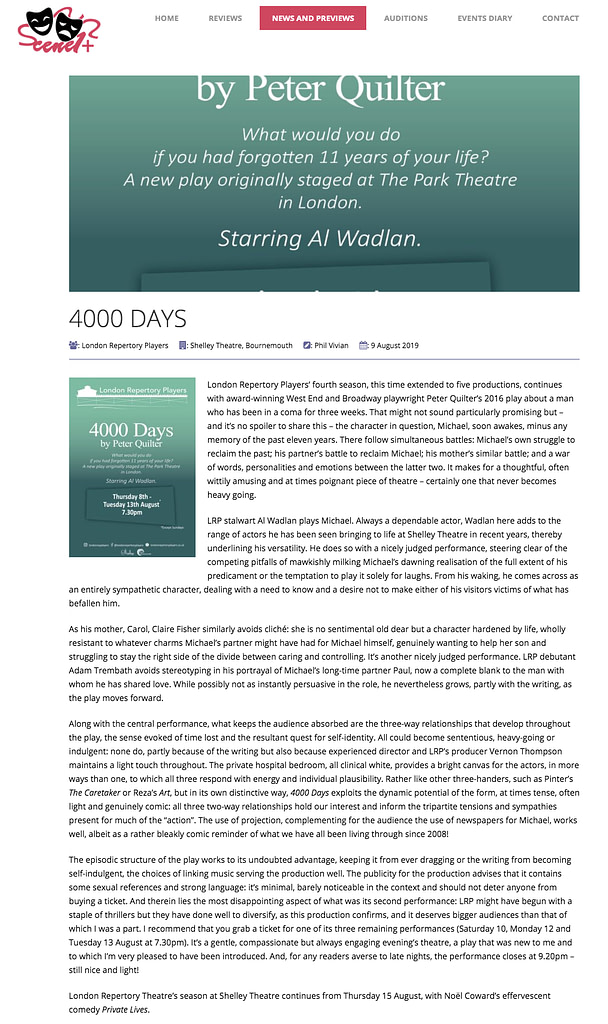 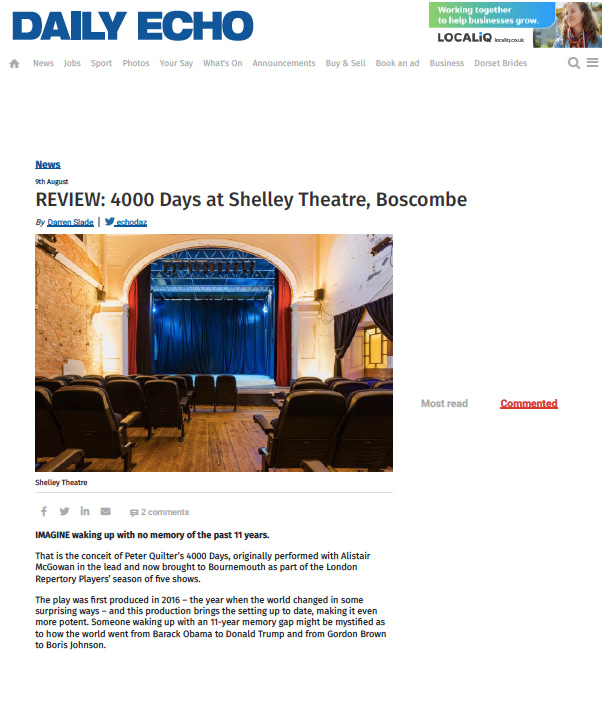 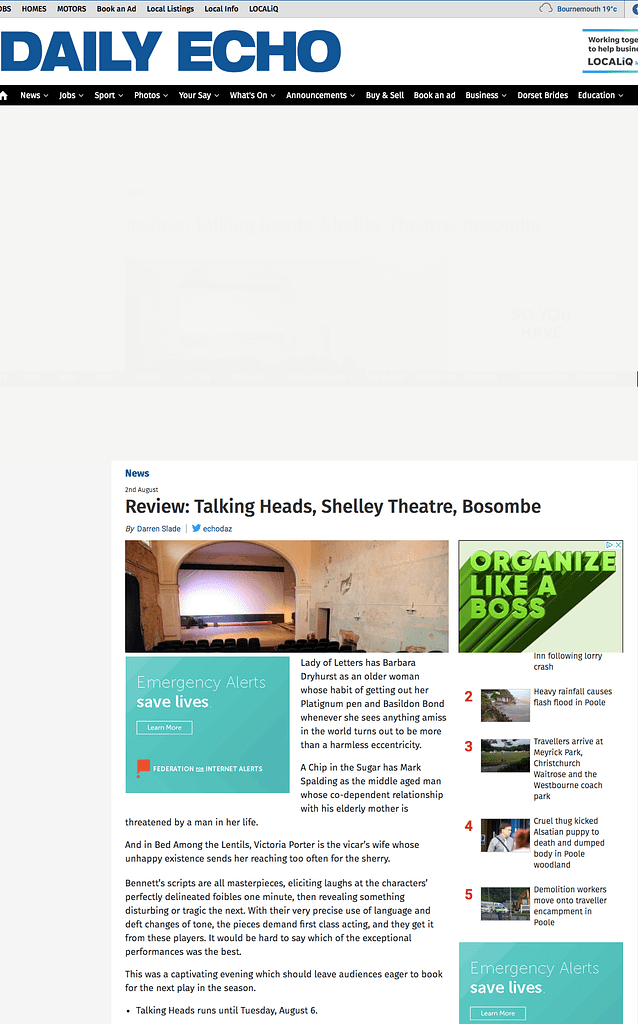 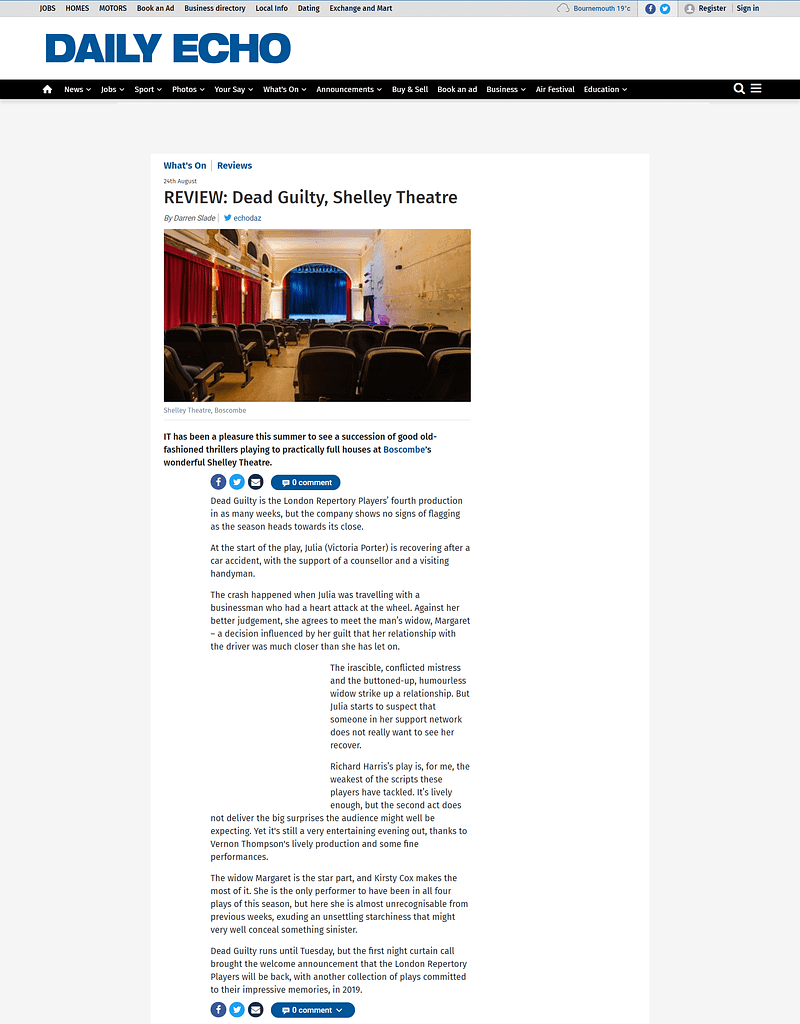 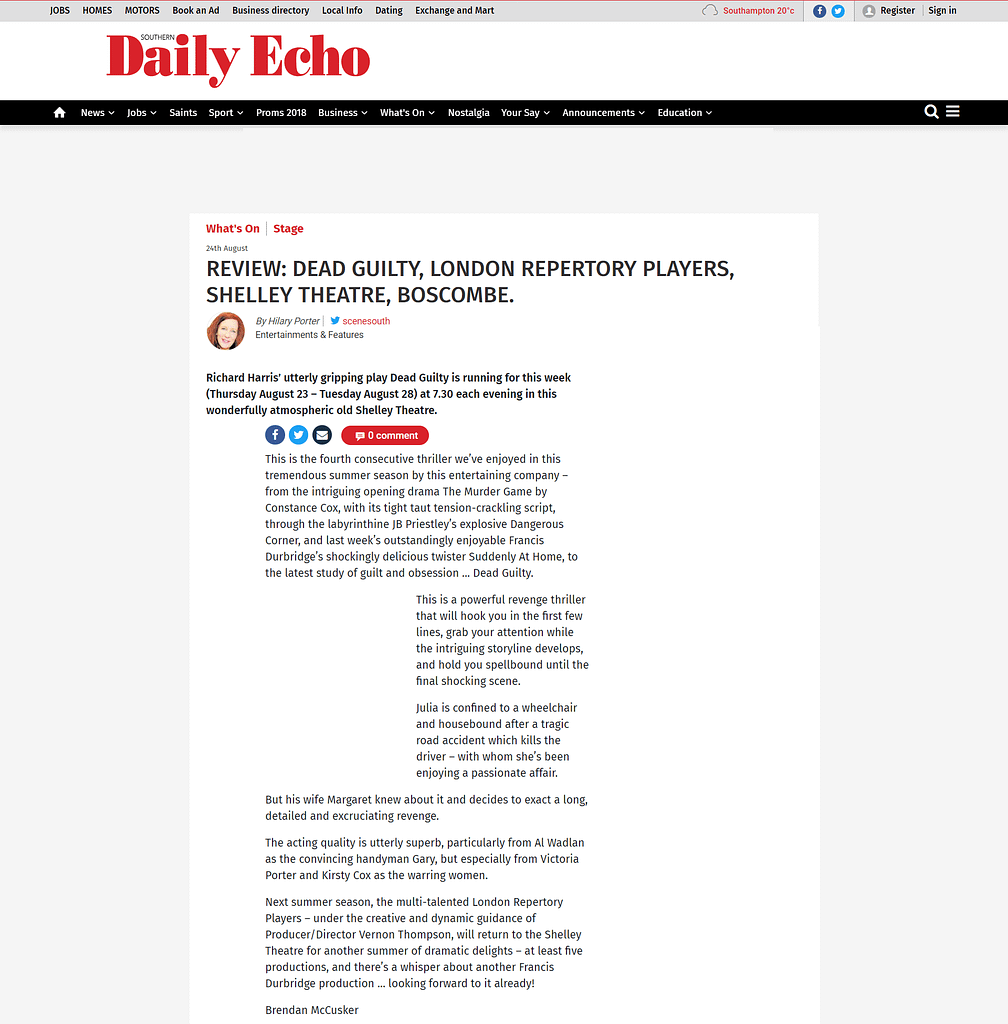 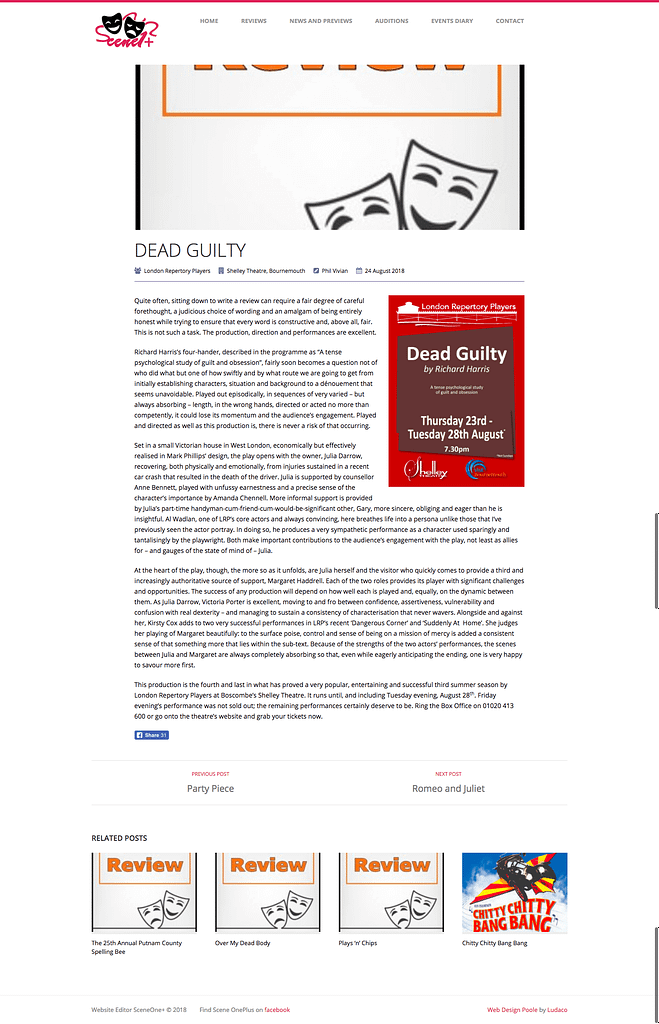 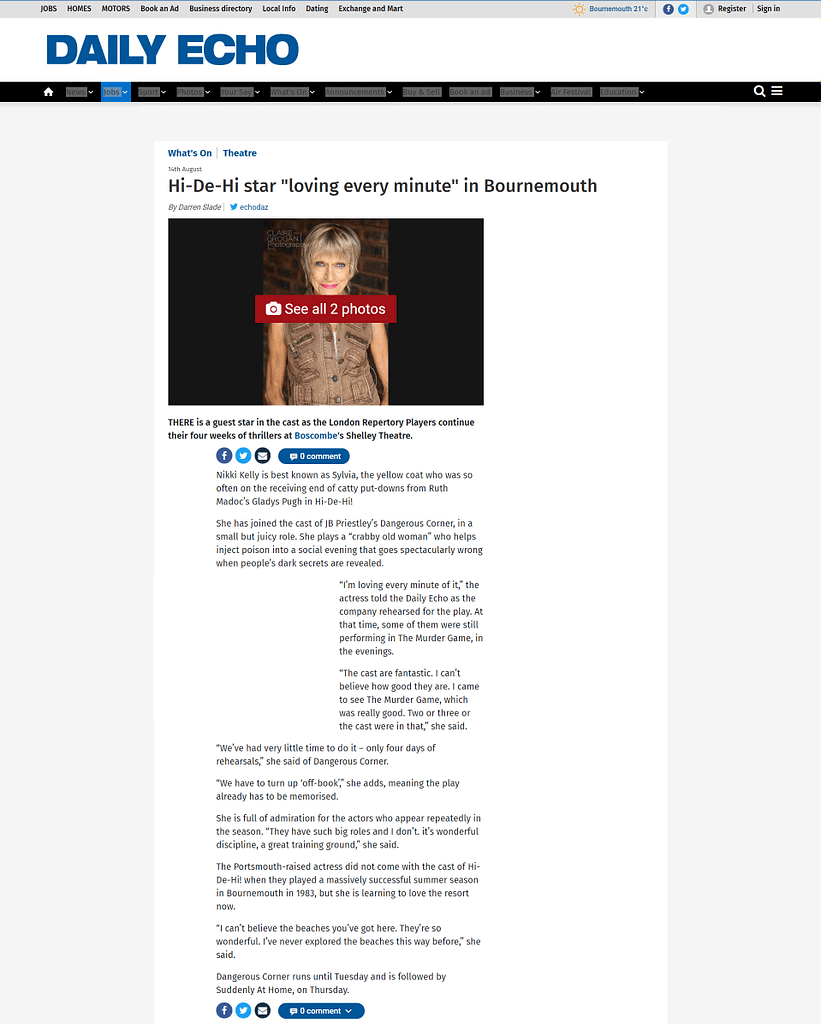 SCENE ONEPLUS
"Each of the actors brings out the key features of his or her character in an unfussy, plausibl way"
17th August 18 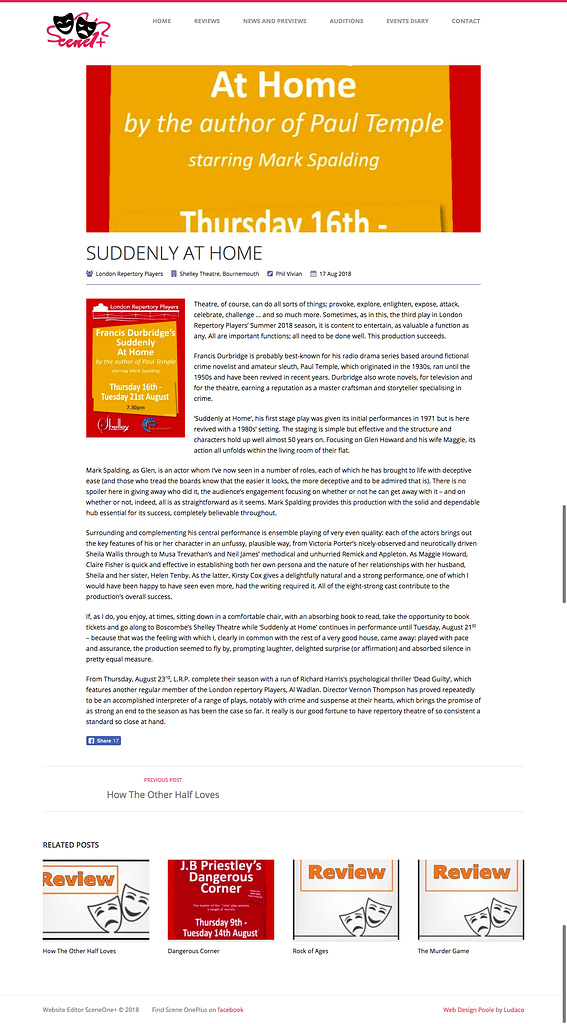 DANCING LEDGE
"Suddenly at home" is another triumph for director Vernon Thompson and the London Repertory Players. 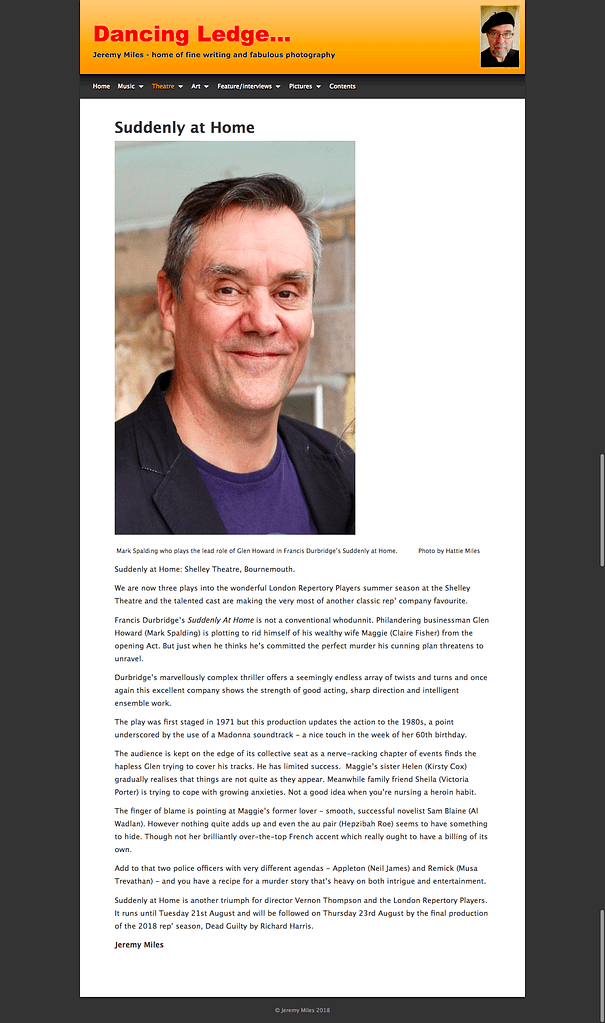 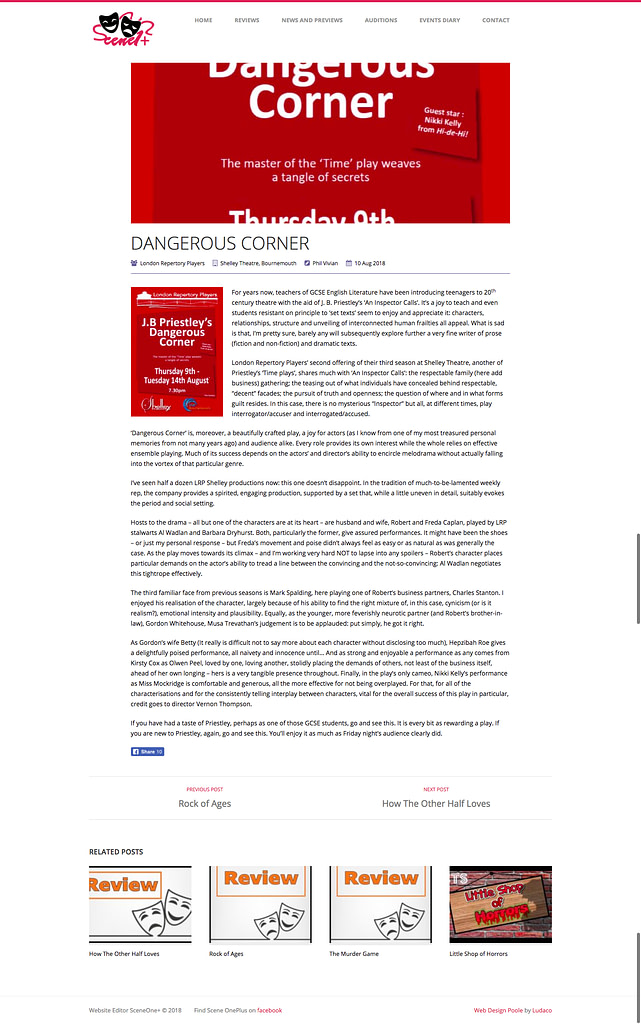 DANCING LEDGE
"Their reading of Priestley's carefully constructed cast of characters is is perfect."
10th August 2018 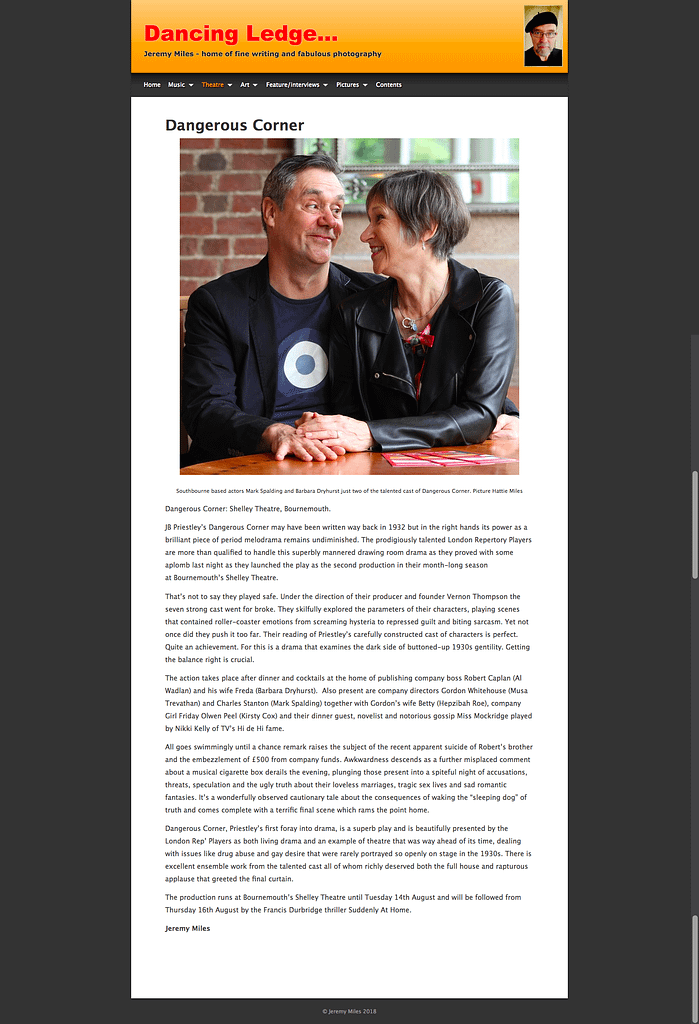 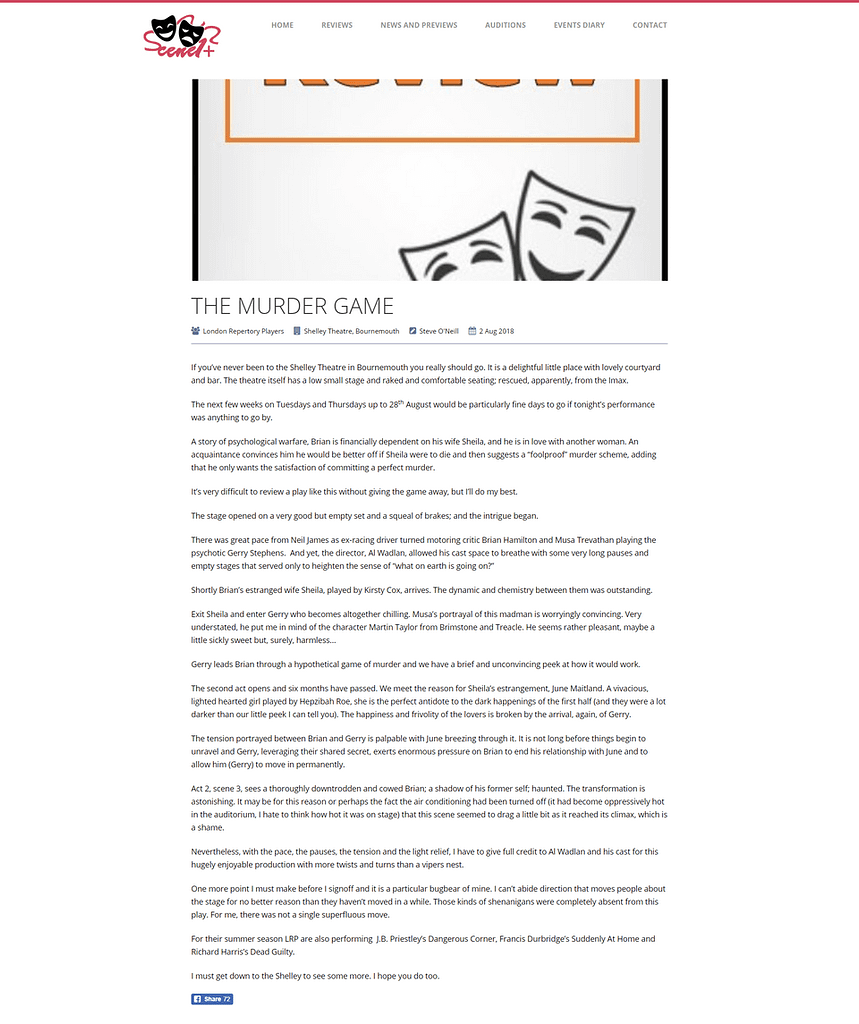 DAILY ECHO
"They are all first rate ... A very exciting thriller"
3rd August 2018 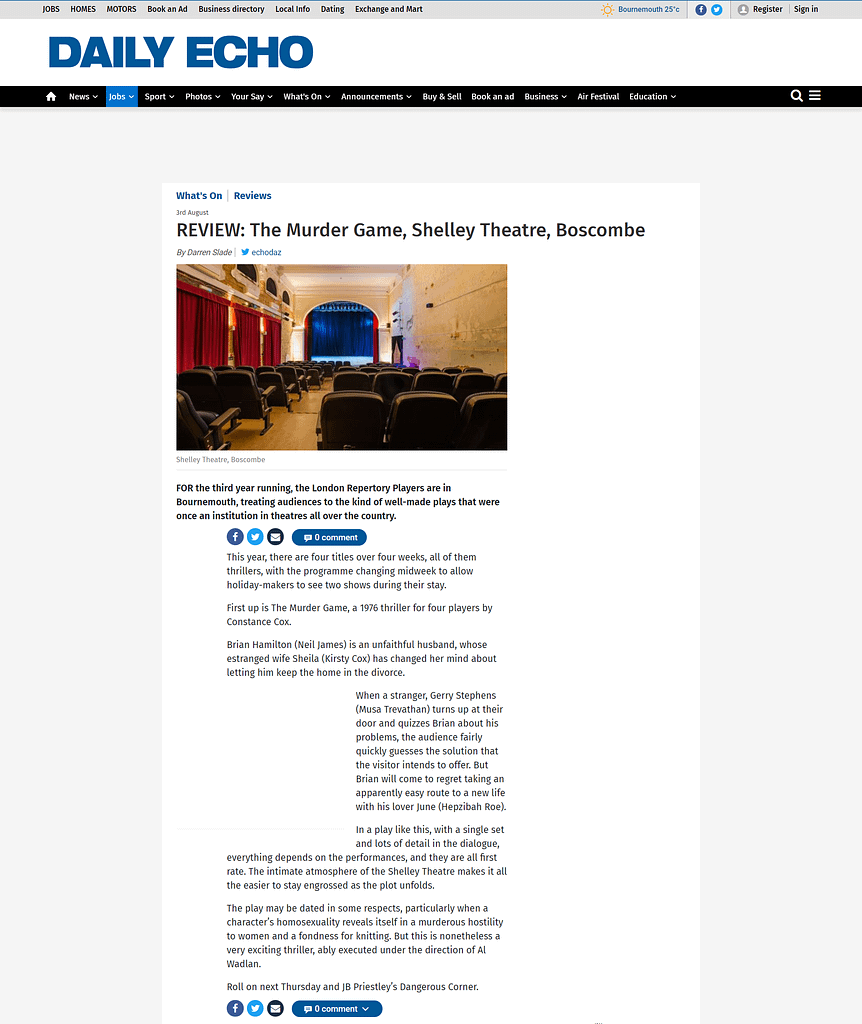 MEDIUM Summer rep seson back to the coast
18th June 2018 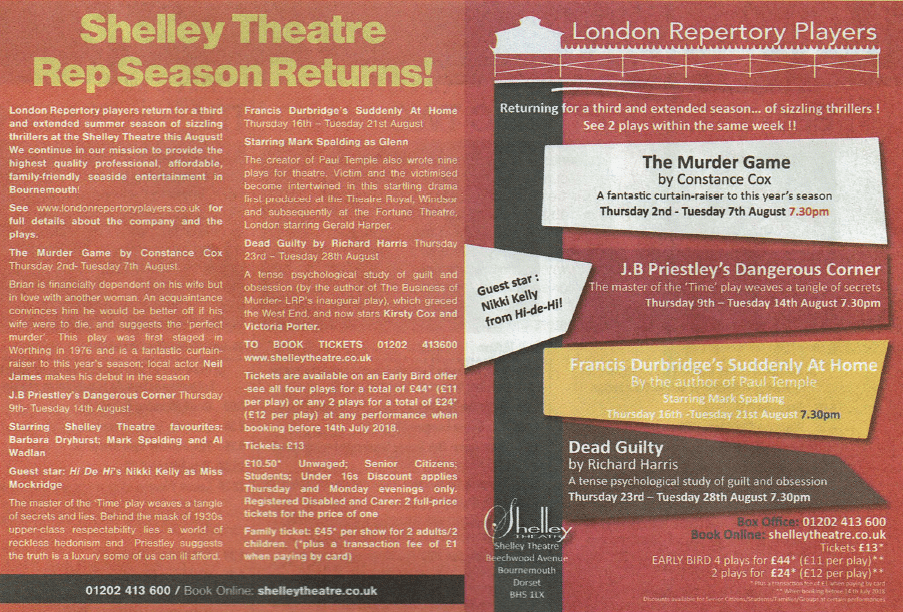 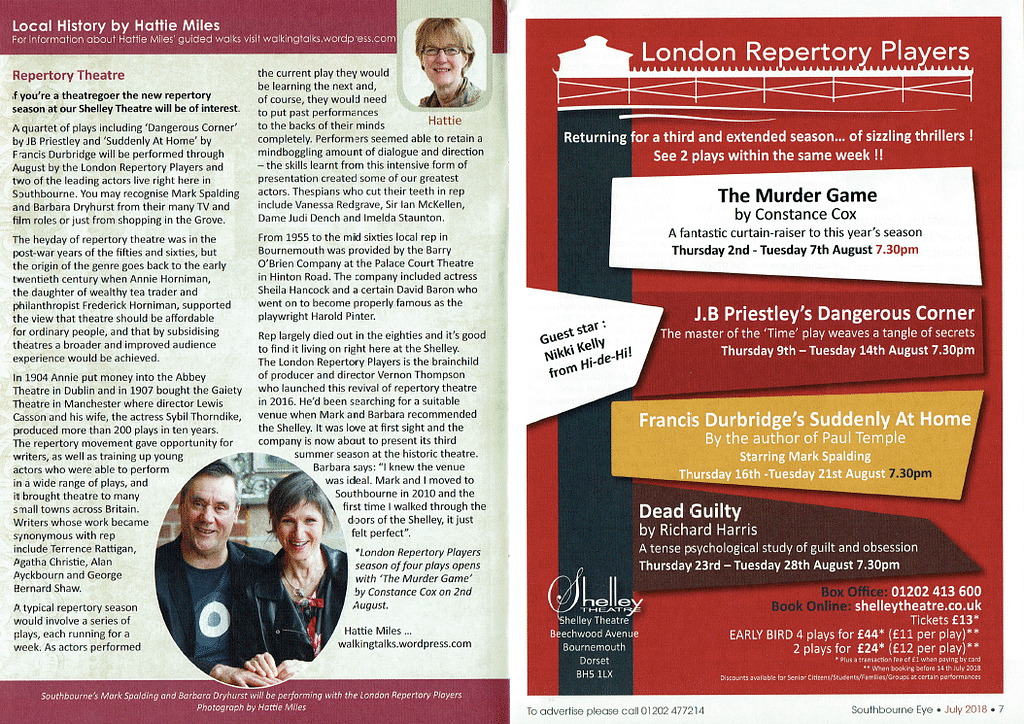 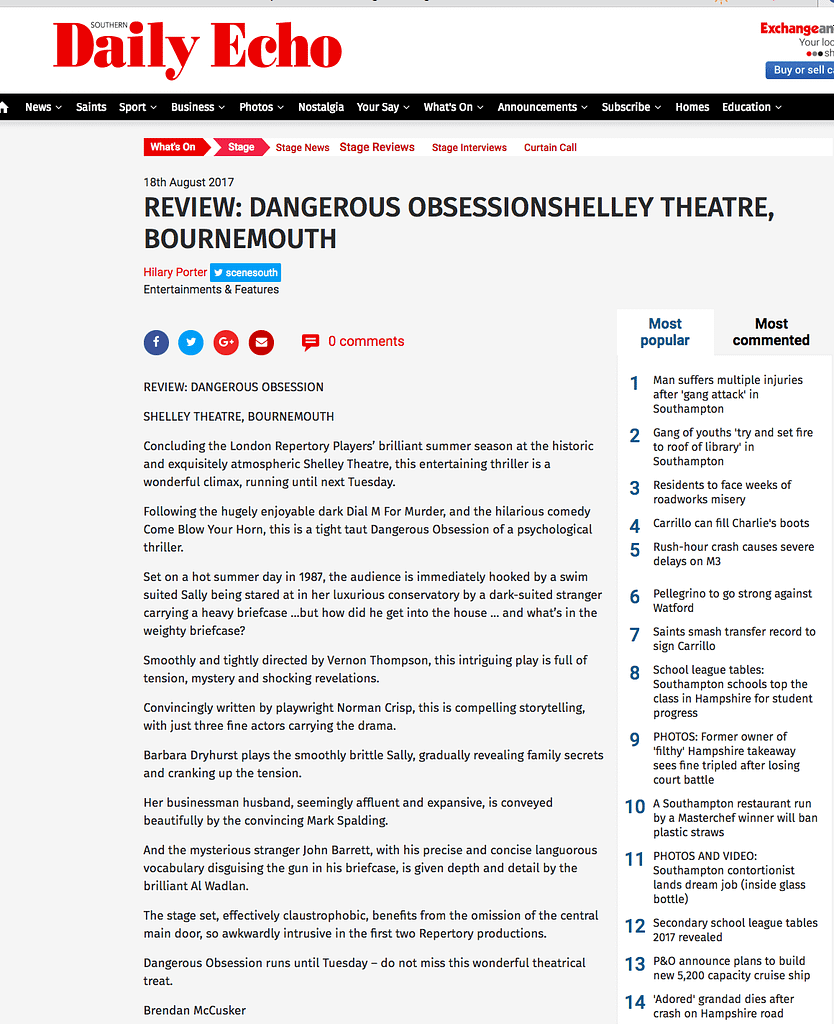 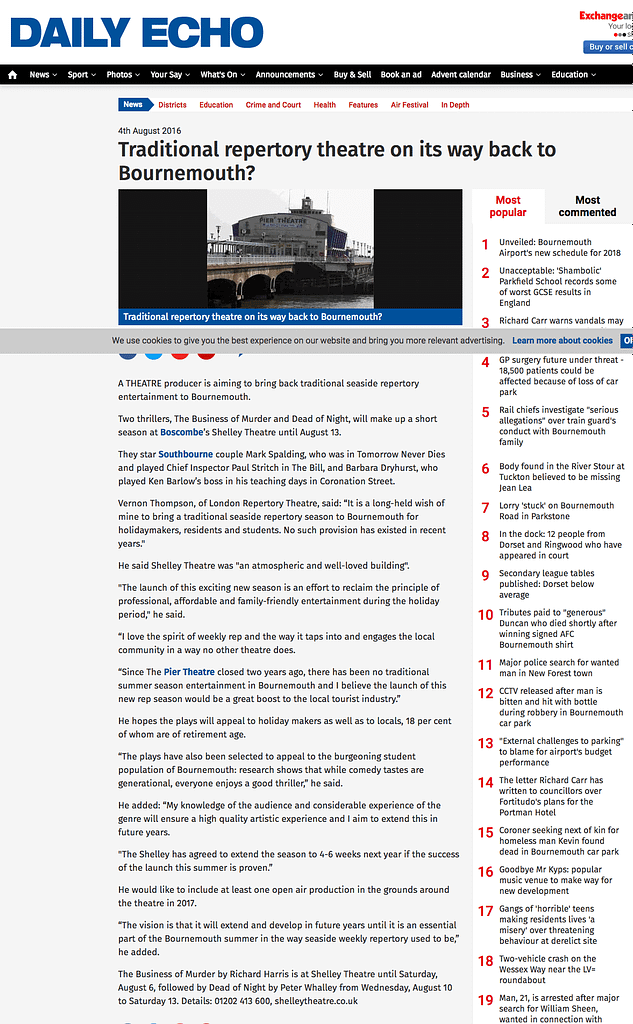 Featuring an explosive opening with a loud gunshot and a piercing scream – echoed in the play’s symmetrical ending – this is ingenious and enjoyable work.

Written (in a week!) in 1932 by JB Priestley – the first of his 40-odd plays, it’s ostensibly a typical 1930s drawing-room drama, with seven wealthy, successful, self-satisfied characters enjoying an elegant dinner party.

In upper-class English accents they refer urbanely to “the afternoon post delivery” and apologise smoothly for “dropping bricks”. But as shocking secrets are revealed, tension increases, tempers rise and insults are exchanged: “That was beastly!”, “Don’t be a cad!”, and “You rotten swine!”

Despite occasional over-wordiness – particularly in the first half – this play was considered daring and controversial for the 1930s, exploring marital infidelity, financial business theft, homosexuality and recreational drugs – all still relevant today!

The missing eighth character Martin – who apparently committed suicide (or did he?) – acts as the catalyst for the other characters’ turmoil of emotions: guilt, jealousy, love, lust, and loathing.

Brilliant direction by Vernon Thompson allows this tremendous play to end with a bang, and then seem to start again, allowing the audience to see things afresh…

Dangerous Corner runs until next Tuesday August 14, nightly at 7.30.

Durbridge won international acclaim as the creator of Paul Temple, one of the most famous of all BBC radio detectives. Durbridge also wrote nine stage plays, this one Suddenly At Home first performed in 1971.

Set in a London flat in the 1970s, accomplished and creative director Vernon Thompson ensures that the audience is hooked, intrigued, and completely entertained by this realistic drama.

The stage set is utterly convincing, not in a clichéd 70s way, but with some hugely appropriate furniture – the CD tower (with the sound of Madonna’s Material Girl,) the semi-circular table, and the wall paintings (which can be purchased).

Costumes, wigs and make-up are spot-on, yet it’s the superb acting quality which drives the drama. Mark Spalding is utterly brilliant as the chillingly realistic suffocating murderer Glen Howard, Kirsty Cox is wonderfully accomplished as the mesmeric Helen Tenby, and Hepzibah Roe is astonishingly effective as the unlikely “au pair” girl.

Surprises, shocks, and twists abound in this clever drama, particularly with the two detectives, beautifully conveyed by Neil James and Musa Trevathan.

odio ut dolor. elementum mattis venenatis, Aenean Sed ipsum ut ut
We use cookies to ensure that we give you the best experience on our website. If you continue to use this site we will assume that you are happy with it.OkNo